Travel down the West Coast of the South Island and see the amazing rock formations at Punakaiki, then travel through the dense rainforest on the way to the Glaciers region. 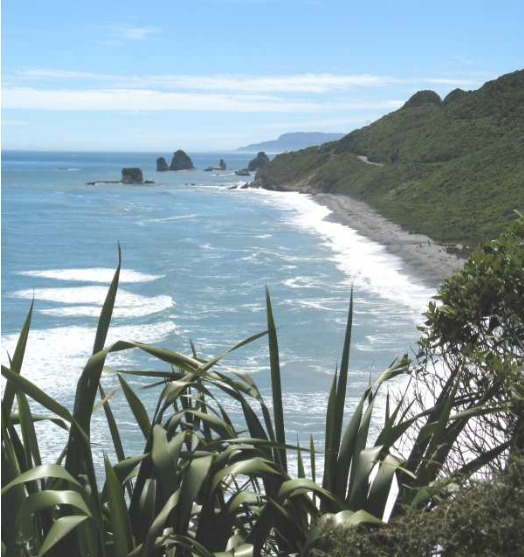 Punakaiki is the gateway to the dramatic limestone country of the Paparoa National Park. It lies halfway between Greymouth and Westport on one of the most spectacular coastal highways in New Zealand. Tourism activities include canoe adventures, horse trekking, caving and guided tours to name just a few. Many crafts people can also be found in this area, including jewellers, carvers, painters and potters.

The Pancake Rocks that Punakaiki is famous for are limestone formations that began forming 30 million years ago, when lime-rich fragments of dead marine creatures were deposited on the seabed, then overlaid by weaker layers of soft mud and clay. The seabed was raised above sea level by earthquakes to form the coastal cliffs and coastline. The sea, wine and rain have since etched out the soft layers to form the unusual rock formations we see today.

When conditions are right, heavy ocean swells thunder into the caverns beneath the rocks and huge water spouts blast skywards through the blowholes in a truly spectacular sight. 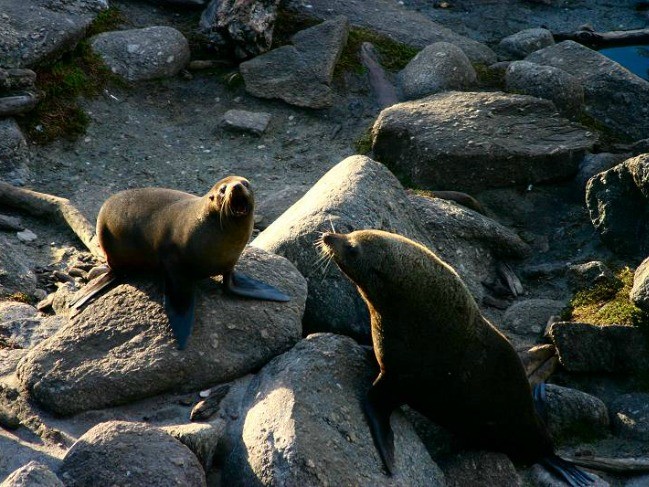 Punakaiki is the gateway to the dramatic limestone country of the Paparoa National Park. It lies halfway between Greymouth & Westport on one of the most spectacular coastal highways in New Zealand. 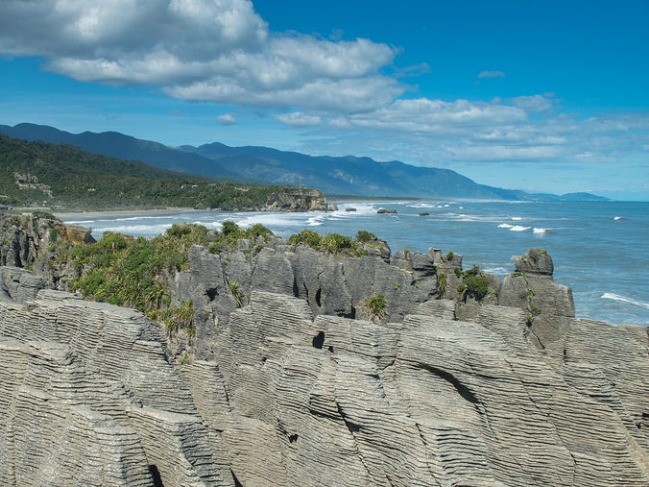 Greymouth is situated at the mouth of the Grey River and is the main rail link between Christchurch and the West Coast. The world famous TranzAlpine rail journey departs from here on a daily return trip to Christchurch.

Take time to explore the town and its many craft shops, in particular those specialising in Greenstone carving or manufacture of jewellery. You will be astounded at the magnificent products that are produced from this raw product, often known as Jade. 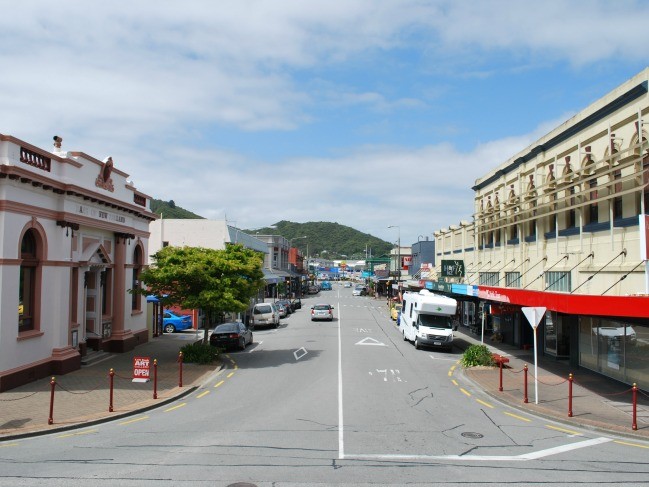 With a small population in this quaint town, the Westlands Dairy Company is here and it processes all the milk for the entire West Coast.

Known for its popular Greenstone outlets and manufacturers. Hokitika hosts the Wildfoods Festival in March each year, a bit of indulgence of inventive dishes even the famous "Possum Pie". 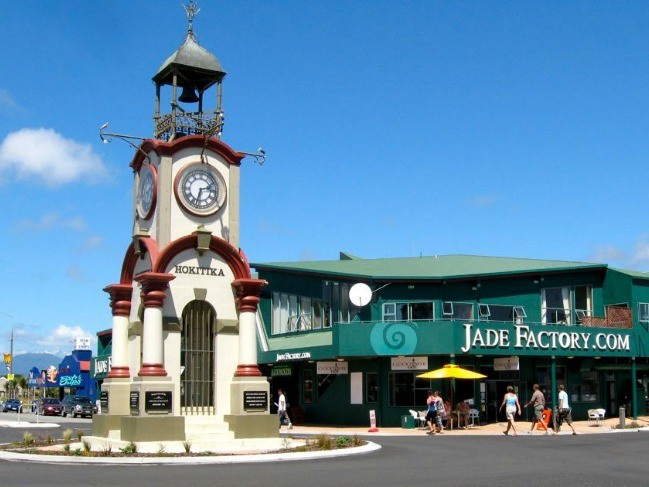 Whataroa is an agriculture area where dairying is the primary activity.

It is the starting base for trips to The White Heron sanctuary, the only breeding location in New Zealand.

Your stay at Franz Josef will be memorable, with its quaint town filled with arty shops and a great selection of cafes and restuarants. 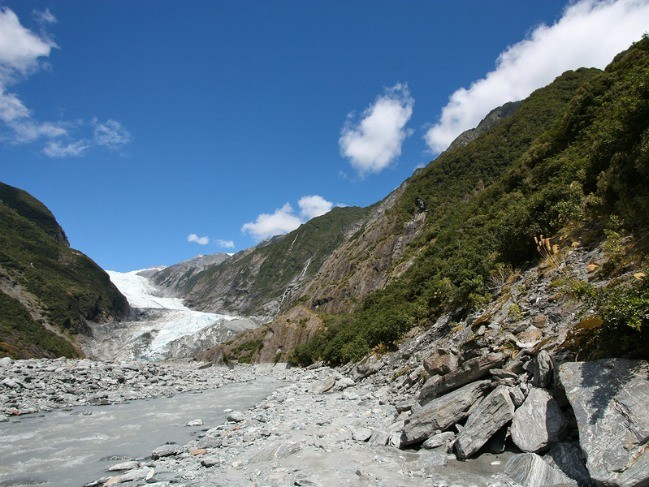 A small alpine village situated south of Franz Josef and a gateway to the Fox Glacier, set in beautiful scenery this small township offers breath taking views of Aoraki/Mt Cook and Mt Tasman. 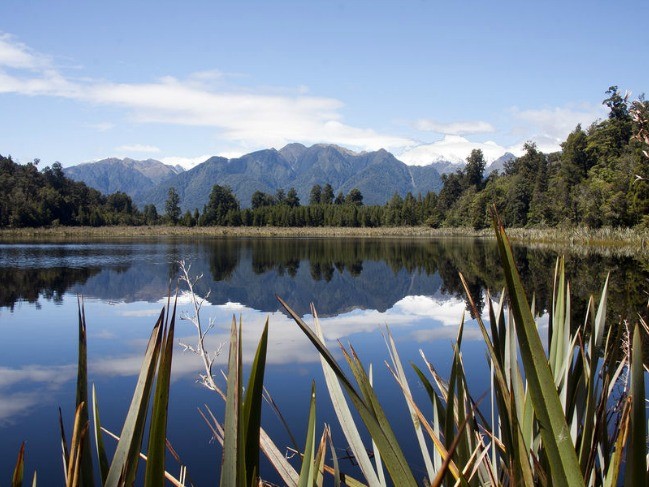 This is the gateway to Haast Pass that will take you up and over the Southern Alps to the Southern Lakes district of Hawea, Wanaka and Wakatipu (Queenstown).

At this juncture you leave the coast and head inland following the Haast River for quite a way until you reach the actual pass, climbing ever upwards to the summit situated in the Mt Aspiring National Park. 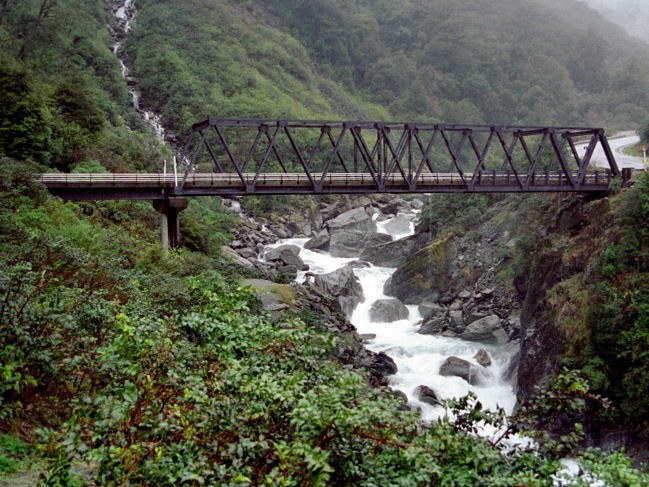